Countries that have taken a bite into crypto A critical factor in the adoption of crypto currencies is the ‘readiness’ that a country must build – infrastructure to support the acquisition, trading and use of cryptocurrencies. We’ve collated some insights form various sources for the benefit of our readers. In case you’re  seeking a refresher on cryptocurrencies, read our blog on key things to know about cryptocurrencies.

The worldwide adoption of cryptocurrency has risen by 880% in the past year, mainly in India, Pakistan, Vietnam, and some emerging economies, according to Chainalysis. The company’s 2021 crypto adoption index, called the geography of cryptocurrency, compares the cryptocurrency adoption based on the on-chain value transferred, peer-to-peer (P2P) exchange, cryptocurrency received, and trade volume between 2020 and 2021.

Considering the geometric mean of the three metrics, it ranked 154 countries and normalized the final number on the scale of 0 up to 10 to give each country a score, determining overall rankings. The closer the final score to 1, the higher the country’s rank.

Compared to last year’s report, Vietnam reached the first rank from position 10, while Ukraine slipped from position 1 to 4. Pakistan and India joined the top 10 countries to adopt crypto this year.

Circumstances leading to a boom in cryptocurrency adoption depend on emerging country’s economic activities. Nations like Nigeria, Kenya, Vietnam, and Venezuela rank high in the index mainly due to the substantial transaction volumes of peer-to-peer (P2P) platforms and the internet using population.

Here are the top countries with cryptocurrency adoption.

According to Finder, Vietnam is the top country in crypto adoption, with 41% of its population owning cryptocurrency.

The country has realized that digitizing money is a way forward and the government will allow its citizens to use crypto basing on Blockchain technology. Phnompenhpost reported that Mr. Pham Minh, the Vietnam prime minister directed the formation of regulations that pilot cryptocurrencies based on blockchain in the next two years.

Like many other countries, there are mixed views about cryptocurrencies. Vietnam must still define the legalities surrounding cryptocurrencies, beginning with the definition of cryptocurrencies. Hopefully, with measures taken, Vietnam will be able to make a dent in the global financial markets.

After giving cryptocurrency a cold shoulder for many years, India is to launch its digital currency, and investors have reasons to cheer. This year, according to Reserve Bank of India’s (RBI) Deputy Governor, the regulatory body is considering introduction of a Central-Bank-Digital-Currency (CBDC) in a phased manner. The CBDC is legal tender in digital form by the central bank. In effect, it’s a digital version of fiat currency, which is the rupee in India’s case.

It means that the CBDC is not similar to private virtual currencies like ether, bitcoin, or dogecoin.

“The CBDC’s are desirable in payments and also protect the public in the volatile environment of private virtual currencies.” remarked Mr. Rabi Sankar, Deputy Governor, RBI in a keynote address.

While the announcement doesn’t mean RBI has changed heart on other digital currencies, it will benefit the ecosystem.

There is a growing belief there won’t be an outright ban on private digital currencies in the country. However, the authorities in India will not allow private cryptocurrencies as legal tender, according to Moneycontrol in July 2021. Digital currencies are to be treated as another tradable asset such as art commodities. Wether the government bans the use of crypto as a legal tender or introduces a framework that encourages the regulated growth of cryptocurrency is yet to be seen.

There’s a boom in mining and trading cryptocurrency in Pakistan, increasing interest in online exchanges transactions. While cryptocurrency is legal, the nation’s money-laundering watchdog, the Financial-Action-Task-Force (FATF), called on national government to regulate the industry. Pakistan is on the greylist of countries that fail to check money laundering and terror financing.

In response, the government set up a committee to examine cryptocurrency regulation that includes observers from the federal ministry, FATF, and the heads of intelligence agencies. According to a committee member believes that some of the other members were clueless and didn’t even understand cryptocurrency. However, the relevant bodies in government are supporting cryptocurrency as nobody wants to be against technical innovation.

According to euronews.next, the Governor of the State Bank of Pakistan, Mr. Reza Baqir, has said that they are looking into a digital asset, the central bank’s digital currency and the potential of having transactions off the books to a regulatory framework.

Recent developments in Ukraine demonstrate the country’s focus to promote a blockchain-friendly ecosystem.

At the government level, the newly established Ministry-of-Digital-Transformation (MDT) promotes a regulatory environment, friendly to cryptocurrency or blockchain projects, in both private and public sectors. To further the aim, the MDT began various initiatives to promote blockchain, including hosting a meeting with stakeholders to discuss the status of blockchain-related work streams.

Additionally, the MDT owns fragmented blockchain projects launched in the past five years. As a result, they suggested establishing a framework to promote use of blockchain technology and implement the financial-action task force guide, the adoption of cryptocurrencies legal jargon through the approach of the European central bank, and the adoption of the related tax regime.

Besides the MDT, an inter-fractional association named blockchain4Ukraine was set up by the Ukrainian parliament. The association will collaborate while promoting blockchain through draft laws set to be introduced in parliament.

In Kenya, the cryptocurrency market is unregulated. Questions emerge on the borderless nature, regulatory risks, anonymity of crypto transactions, and volatility of its price. Therefore, regulators have a difficult time balancing risk management and promoting market innovations.

The CBK or Central-Bank-of Kenya regulate cryptocurrency with complete broad discretion and legal avenues. The major law governing digital currency is the National-Payments-Systems-Act (NPSA) and the Kenya- Money- Remittance regulations.

The CMA has the discretion to classify cryptocurrency as securities. For instance, a case involving CMA and Capital Venture ruled that ICO constitutes securities. The company was raising funds for its initial coin offering.

The Kenya-revenue-authority (KRA) also declared that digital currencies are under digital marketplaces, as noted by the Global Insights. Therefore the digital tokens need to be subjected to tax at a rate of 1.5% on the gross transaction value.

The Kenyan government is drafting regulations that encompass cryptocurrencies. Luckily the crypto regulations are in many jurisdictions in the continent, majorly South Africa.

Here’s a list of countries that are adopting cryptocurrencies at a commendable pace. 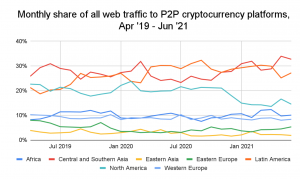 Countries With A Stance Against Cryptocurrency

While cryptocurrency and bitcoin are making strides to becoming mainstream facilitators in payments, they are illegal in many countries. As institutions are increasingly aware of the benefits of the technology, many countries are lowering the regulatory barriers. However, some still ban digital currencies.

Cryptocurrencies are banned in the following countries:

While the global adoption is widespread, cryptocurrency regulations are yet to be fully implemented, and financial leaders are still unsure since they have some risks. In addition, the industry is growing with new technology and coins introduced frequently increasing volatility. Therefore, experts advise that you examine the risks to avoid permanent losses.